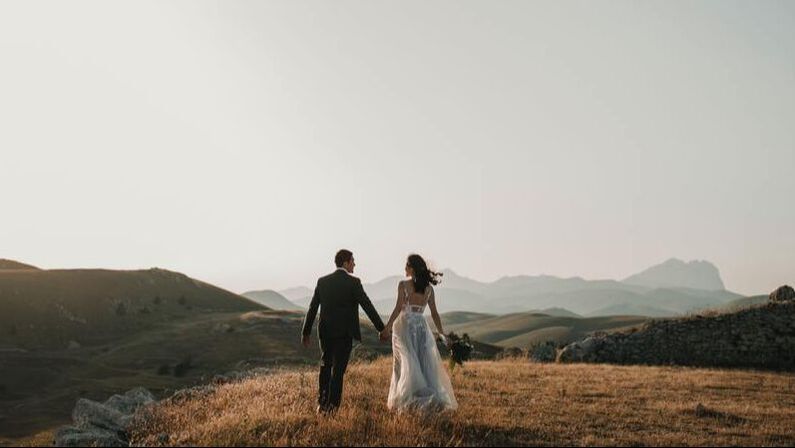 Photo by Foto Pettine on Unsplash
There are a variety of Unity traditions that may be included in a ceremony. Some are old and some are more recent, but unity traditions are growing in popularity, because they add another level of commitment. They usually are between readings and vows, but can also be at the beginning, or just before the declaration of marriage. Below are some examples of popular unity traditions.

"Friends and family, to conclude this ceremony, will the designated witnesses please come forward and sign their names to the certificate of marriage."

Usually the two witnesses are best man and maid of honor but can be any two who attended the ceremony. Light background music can be played during the signing. Signing is then followed by hand-off of certificate, introduction, and recession.

The bride and groom each take a lit candle and simultaneously light a third larger "unity candle." They may blow out their individual lights, or leave them lit, symbolizing that they have not lost their individuality in their unity.

Variation 1: Each mother holds an unlit candle. Fathers light the mother's candles, then mother's use those candles to light bride and groom candles; followed by bride and groom lighting the larger unity candle with their respective candles.

Variation 3: All guests are given a candle, and the first guest's is lit. Guests pass the flame until all are lit, and then the bride and groom together light their unity candle. This variation typically includes a proclamation that this ceremony represents the unity of friends and family supporting the couple in their marriage.

(During Candle Lighting) "On this day you make a new light together, symbolizing the two becoming one. May you also continue to recognize that separateness from which your relationship has sprung. May the lights of your own special lives continue to feed the new flame of love which will fuel your future together -- through all its hopes and disappointments, its successes and failures, its pleasures and its pains, its joys and its sorrows -- a future filled with the warmth and love of the flame you share today." 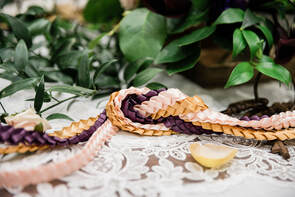 After the readings and before the vows - Officiant will instruct the couples to face each other and hold hands.

Officiant wraps the hands and then says, "The promises made today and the ties that are bound here greatly strengthen your union and will cross the years and lives of each soul’s growth. Do you seek to enter this ceremony?"

Bride and groom say together, "Yes we do."

​This is followed by the vows.
I create custom Braided and Woven Handfasting Ribbons and Cords that you can order online or by email at amber@onceuponawedding.us.

For this, the couple will have to have branding irons made for the ceremony. Bride and groom will have their own irons. Example: Initials in a heart. When they apply the brands to a board, the hearts should just touch. Makes an interesting display for the home.

A simple unity ceremony where the bride and groom exchange roses.

Originally known as the "First Fight Box", it can also be used as an Anniversary Box, which sounds a bit more positive. Start with a box. It can be carved, painted, decorated, etc., to fit the wedding theme.

​Predrill the top so that the nails fit snug but will pass through easily. Insert the nails before the ceremony, so that it will be ready.

During the ceremony, put wine and love letters inside, and then bride and groom nail it shut. First Fight Box means it is to be opened after the first fight, letter read, and wine drank, to remind the couple of their commitment and love for each other. Same with the Anniversary box, except that it will be opened at a specified anniversary.

Pick one - 1st, 5th, or 10th are good choices. Purpose of the box - Fight or Anniversary - will be explained by the officiant during the sealing.
Personalize your very own wine box here.

The bride and groom each take a carafe of wine and each pour some into a single glass, which they both drink from. One carafe contains red wine representing the deep richness of the love in their hearts and the robust energy which keeps their loving relationship going. The other carafe contains white wine, fermented in oak barrels, it represents the strength of a loving marriage and a lingering taste in their soul for the love they feel for each other. The combination creates a rosé, which is symbolic of their blending together through a committed relationship in marriage. Some of the wine will remain in their individual carafes which represents that each of them remains separate individuals.

Officiant: "This cup is a sign of your unity. Although you are two distinct persons, both respecting the equal dignity of the other, you have chosen to unite your lives and to seek your happiness together. You drink from the same cup to symbolize your trust in each other, and to be reminded that from this day forward you will share all that is to come, encompassing all sorrows and joys, all hardships and triumphs, all the experiences of life. Drink now and may the cup of your lives be sweet and full to overflowing."

Officiant: "May the robust energy, strength, and rich love you have for each other be with you always."

​Variation: Tables with wine glasses are placed next to seating area, for guests to pick up a glass as they take their seats. When the bride and groom begin their drink, guests drink with them, to symbolize commitment to the couple.​

A Quaich is a two handled Loving cup that signifies the trust and unity between the partners. The Quaich (pronounced "Quake"), filled with wine or other favorite drink, either before or during ceremony, sits on a pedestal between the bride and groom. At the appropriate moment, the groom picks up the Quaich by the handles, bride places her hands on his then they take turns drinking.
​
Example of reading for Quaich Unity: "The Quaich, a two-handled loving cup, is an ancient Scottish tradition that seals the bond of two people and marks the blending of two families. It symbolizes the love and trust implied by the bond, as the new couple shares the first drink of their marriage together.
___________ and _________, it is now time to complete your bond."

The couple each pour a different colored water into a single glass, creating a third color. If children are to be included in the ceremony, simply add more glasses and more different colors. The end result can be a fun experiment.

Similar to the water ceremony, the bride and groom both pour different colored sand into a glass, taking turns, a little at a time, which creates colorful swirls and patterns. After the ceremony and festivities, jar is typically sealed by pouring hot wax into the top of the jar, and then capping it with a cork stopper or other lid. This will preserve the swirls and make a nice display item for the home.

Variation 1: Includes children or other family members of the bride and groom, each having a different colored sand and taking part in the unity ceremony.

Variation 2: Brides family fills one glass with different colored sands, and groom's family fills a second. Then bride and groom take their respective mixes to alternately fill the large container.

Variation 3: Bride and groom combine sand during the wedding, but all the guests receive tiny vials of different colored sands, to add to the carafe during the ceremony. When all sand is in, the carafe is sealed, typically with hot wax.

A common reading used for sand ceremonies (can be adapted for water, too): "Life's moments are as grains of sands, forever moving and shifting with the winds of time. Today, ________ and __________, you are making your eternal commitment to one another, blending the sands of your lives together. The separate vessels of sand you each hold represents your lives up to this moment. And from this moment on, as with the sands you now blend together, you shall become one; a family created."

Colored sands can be purchased here.

The bride and groom tear off pieces of bread, and then each eat a piece. Sometimes the bread is also shared with family and friends. It symbolizes their future as a family together.

​Variation: A large loaf of fresh baked bread at the point of the receiving line. Bride and groom tear off a small piece and hand it to each guest as they are greeted.​

In Eastern European ceremonies, the bride and groom circle the altar three times, which are their first steps together as husband and wife. In Hindu ceremonies, couples circle the fire seven times, sealing their bond. The unbroken circle represents the unbroken commitment to each other.
​
Poetry, special music, photos, videos, audience participation rites, etc., can also be tastefully added to a ceremony for that personal touch.
G-WS8F5RVMRZ